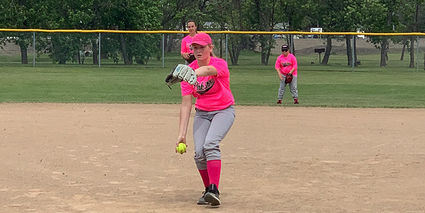 Lora Wobbema is one of three pitchers for the Pink Sox.

Early Tuesday afternoon, the Pink Sox Softball team played their first game in New Rockford against the Dakota Prairie Knights. In the first inning, both teams were warming up as neither

team was able to score.

At the bottom of the second inning, the Knights were able to get it going by putting pressure on the Pink Sox defense and coming out with one run, leading the game 1-0. In the third inning, the Pink Sox were able to answer back. Slowly they positioned themselves so that the bases were loaded a total of three times during this inning. By the end of the inning, the score had

changed from a Knights one-run lead to the Pink Sox leading the way with three total runs.

In the third inning, the Sox were able to play exceptional defense and even score another run, increasing the lead by three. The fourth inning was more of the same as three outs led to another Pink Sox run. In the final inning, the Knights were able to score once more, but it was too late as the Pink Sox won this one 5-2.

In the second game, the ladies kept their hot streak and ended up winning this one as well with almost twice as many runs from the previous game.

The final score of this match-up was 9-2 in favor of the Pink Sox. With two wins in Devils Lake on Tuesday, July 16, a split against Harvey on July 18, and back-to-back wins against Rugby at home Wednesday, the Sox are now 5-1 on the season.

The Pink Sox' next home game will take place on Tuesday, July 7 if you want to catch the action as the season progresses.