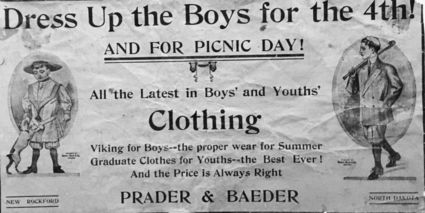 An early ad clipped from the "Transcript" found its way into the Eddy County Museum archives, offering a unique look into the fashions of the early 20th century.

The above ad, which was published in the "New Rockford Transcript," was found in the archives of the Eddy County Museum. Not only does it feature some interesting summer fashion for the early 20th century, but it also depicts a pivotal time in children's clothing and fashion.

The death of Queen Victoria in 1901 marked the end of an era. Not only was it the end of her 63-year reign over Great B...