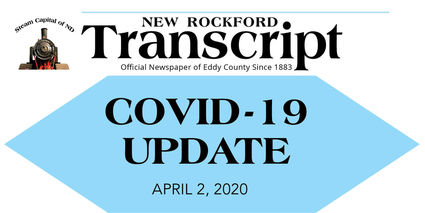 Now 43 people across N.D. have recovered from COVID-19, according to data released today by the North Dakota Department of Health. A total of 159 people have tested positive for the disease, and 28 have been hospitalized due to the virus. The number of positive cases increased by just 12 today, partly due to a chance in the reporting process.

Beginning today, test results will be released once daily moving forward. Results from the past 24 hours will be posted at 11 a.m. CDT. This will allow more investigative time in between intervals, according to Burgum. The governor's daily press briefing time slot has also changed. Starting Friday, April 3, the conferences will begin at 3:30 p.m.

It's important to note that the hospitalization number reflects the cumulative total of those who currently are or who have ever been hospitalized due to the virus. Therefore, the number is not adjusted down when an individual is discharged from the hospital or dies from the virus. Likewise, the total case count is an indicator of the total positive test results recorded to date, and does not go down as people effectively recover from the virus.

During today's press conference, Burgum announced that he had expanded an Executive Order from March 27. Now school districts are able to conduct their elections via mail-in ballot only if they choose, thus eliminating the requirement to have a physical polling place.

The numbers of unemployment claims continue to rise greatly. Today alone 2,806 claims were filed, for a total of 30,047 claims since March 16 in the state. According to Burgum, that represents on average a year and a half worth of applications in less than three week's time.

"We've never had unemployment benefits like we have right now," he said, adding that therefore it should not be surprising if the numbers continue to climb at record levels. Yesterday he filed an executive order waiving the one week waiting period for unemployment benefits for anyone who has filed claims since March 14.

The conversation turned to rumors about new directives to wear masks. When asked if the state has enough masks to outfit the residents of North Dakota should there be a national order to wear masks in public, Burgum replied, "Stay at least 6 ft. away from other people, and you don't need a mask."

Burgum said he was not aware that such an order was imminent. He noted that the state does not currently have enough masks for everyone in N.D., and asked that residents save masks for the medical professionals who need them to care for patients with COVID-19.

There are no plans in place to expand business closure orders beyond what is currently in place. Burgum responded to today's question by citing that it's important for the people of North Dakota to take precautions and follow the directives currently in place. The way the virus spreads is not going to be determined by what is said in Washington D.C. or in Bismarck, he noted, but rather by the actions of people in our state. The current directives on how to stop the spread of COVID-19 are available online at https://www.cdc.gov/coronavirus/2019-ncov/prevent-getting-sick/prevention.html

N.D. represents one-third of one percent of the U.S.population. Therefore, based on current national models that predict between 100,000 and 250,000 deaths in the U.S. from COVID-19, N.D. could see up to 600 deaths. "We would find that unacceptable," Burgum concluded, reiterating that state officials were working hard to make sure that doesn't happen, and that it's important that every resident is educated on the importance of following the guidelines in order to slow the spread.