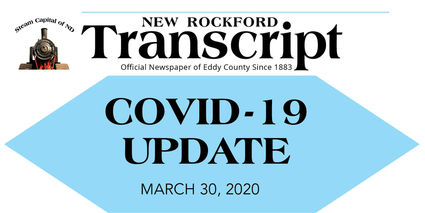 A woman in her 80s from McHenry County is the second N.D. person to die from COVID-19, the North Dakota Department of Health (NDDoH) reported Monday.

The NDDoH said that the woman had underlying health conditions and contracted the virus through community spread.

On Sunday President Trump extended national social distancing guidelines to April 30. Trump said his administration was extending the guidelines to avoid a major death toll, as he pointed to a forecast estimating that the U.S. could have 2.2 million deaths from COVID-19 if drastic measures aren't taken to mitigate the outbreak. Trump said the administration is working to keep the projected death toll below 100,000. That day the U.S. case count climbed to 142,004, and 2,484 Americans had died from the virus, while 4,559 people had recovered. New York continues to be the epicenter for the virus in the U.S., as it was approaching 60,000 confirmed cases as of Sunday and 965 deaths.

Here at home in Eddy County, more businesses were temporarily shuttered this past weekend due to new orders by Gov. Burgum. All salons, massage therapy businesses and tattoo and body art parlors were ordered closed as of midnight Saturday. That order currently extends one more week, through April 6.