Our Outdoors: The Cap 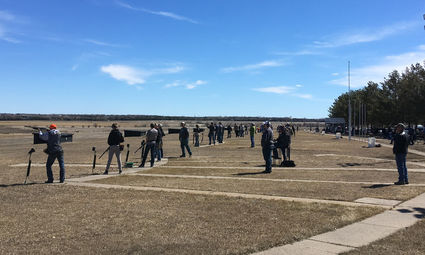 Clay Target League programs are so popular that many schools are now turning away participants and utilizing waiting lists – some years in advance of sixth grade eligibility – due to the excitement and demand.

I can recall rolling down the gravel driveway of the shooting range to attend my first high school trap team meeting after moving to town in 2017, overwhelmed by the excitement and possibilities the 13 trap houses presented. Through a connection on Facebook I got the time and the date from one of the shooters' parents and found my way to the gun club located a few miles north of my house. I learned in the first night that the group I was joining drummed up enough interest against an approaching spring deadline and mustered 36 kids to shoot their first spring season in about as many hours before the registration with the state league closed. My jaw dropped at the dedication of the parents, volunteers and club members to rally the troops in such a late hour, and it turned to a smile when I suggested the possibilities of what we could do with a little more lead time.

The following spring after a meeting that brought out nearly 50 kids at the last of the four area public schools - one which we had just gotten permission to register - we knew we'd hit 120 and couldn't rule out 150 participants for the spring season. With booths at sportsman's shows, in-person and online lobbying of school administrators, and good old-fashioned plastering of flyers to lockers we onboarded the two private schools to offer a shooting sports opportunity to all six educational programs in the area. In preparation for the surge – nearly six times the initial spring's count – phone calls and emails went out to gun club members, family, friends and parents of shooters and by the time the chilly spring season kicked off, we had 80 volunteers on the range clearing snow from cement paths, hustling squads, scribbling Xs and Os, and helping 180 young shooters find their form.

Logistically, the number 240 has hung over the program since that spring when we started to get a sense of its growth trajectory. 13 houses, minus one for a spare in case of breakdowns, is twelve. We have four flights spread out over the five hours where our now nearly 100 volunteers are generally available on a Sunday afternoon. There are five kids per house each flight. Five times four times twelve is 240; and our drop-dead cap based on volunteer availability, time and infrastructure. Last spring our participation numbers rose to 205 and with just 25 graduating seniors the flood of 70 new shooters – with more than 50 in grades six through eight – for the following fall season suggested that 240 for the spring of 2020 was a reality.

With preference given to previous shooters and a 23-day early registration period kicking off Jan. 1, our numbers were at 203 by the time we invited new shooters to learn more about the program and sign-up. Within 90 minutes of opening the new shooter registration, we were full. 240 was no longer a cloud on the horizon, but a reality. Panicked, I shut down the online registration and converted it to a waiting list as names of shooters – both previous who had drug their feet and new ones who might not have taken my stressed presentation seriously at the sign-up meetings – piled up in the online registry. While hitting the cap was exciting and a testament to the work our group has done to drive the demand for the sport in the area, 240 is a problem, despite the consolation we might take from it in conversation of being a "good problem to have."

The weird thing is, no one says that when the demand for public access by sportsmen exceeds the amount of nearby land open to hunters pursuing pheasants, ducks or deer when laws don't allow for additional acres and state agency budgets are pressed to their maximum for management. Certainly, nobody lauds the lack of habitat when at the top of the acres allowed in programs like CRP to bear those game species for sportsmen to pursue. The same should hold true for trap shooting opportunities and an eye for expansion – in the form of more volunteers, more facilities and additional time – much like the efforts put into the backside of the hunting recruitment equation, is important in adding to the fold.

This spring – with similar growth noted across the country for shooting sports – is a call to anyone who wants to make a difference in the lives of young people and to add to the opportunities they have to participate not only in shooting sports, but any extracurricular activities, by being the additional voice of reassurance on the line, the extra hand that fills a trap house, or the scorekeeper that bears the spring wind and occasional raindrops to mark down the mounting hits in an expanding program. Perhaps there's a place in your community to add more trap houses, to start a gun club or to expand one with a little bit of elbow grease and some blue ink on a grant form. Be the one that helps find a way to reach whatever cap exists in your area and dreams up ideas to blow past it for the good of those youngsters looking for a positive outlet. In the process, be the one to show that there is no limit on what is possible on the range, in the field and all the places where the sound of a shotgun resonates... in our outdoors.