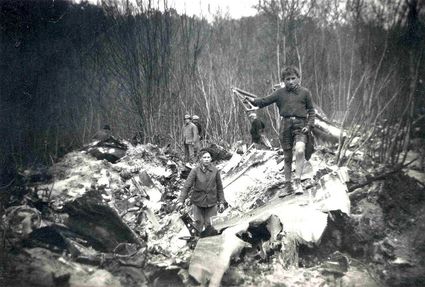 This photo from the Carpetbagger Photographic Archives depicts French locals perusing the debris at the crash site the morning following the crash. A B-24 loaded with fuel, 12 canisters of explosives and armament, and six self-destruct charges did not leave much when it hit the ground. The picture above is the Simon plane following the morning of the crash. French partisans snapped this picture before the German salvage crews showed up.

One look at the "Transcript" archives from 1944, and one thing becomes very clear- the world was at war. Throughout Europe and the Pacific, men and women put their lives on the line to protect the free world and stop fascism.